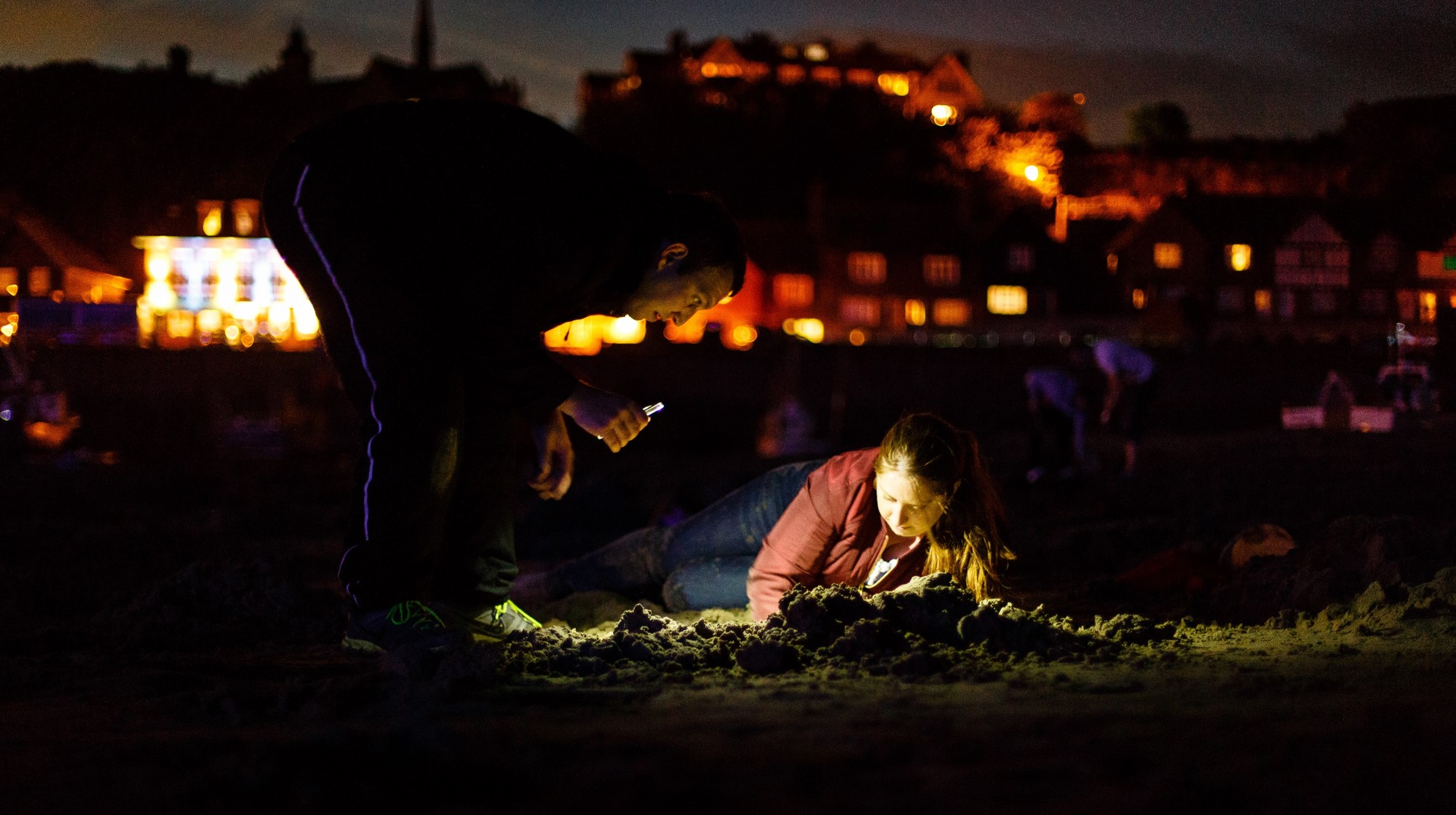 Throughout the Triennial our hosting team will be writing blog posts about their day-to-day experiences of life at Folkestone Triennial 2014. The first post is by Host Dan Addison on the announcement of Michael Sailstorfers piece....

I heard about the gold rush. By the time I finished work it was in full swing.

I guess it says a lot about me that I spent the day working in a shop for £6.37 per hour (if £7.65 is a ‘living’ wage then am I dead, and is this heaven?), but headed towards the harbour knowing full well I wouldn’t be doing any digging when I got there. I have this idea that I’m smarter than the average bear, that everyone digging has no grasp of how vanishingly slight the odds are that they’d find anything, that £50 for an easy day on the clock trumps £0 for blood, sweat and tears. I’m already up to my eyeballs in frustration, thanks.

Well, it also says that my pessimism has become self-perpetuating. I consider myself profoundly unlucky (despite the small matter of having been born a white male in a developed country towards the end of the 20th century - back of the net!), but my cynicism is bound to compound this. The fruit is out on a limb. You’ve gotta be in it to win it. Risk it for the biscuit. Roll the dice for a bowl-a-rice (can you tell I’m Folkestone’s top rapper? I’m not even joking). The connection between this artwork and Strange Cargo’s The Luckiest Place On Earth is satisfyingly obvious.

In fact, it says a lot about me that my first reaction to the news of the treasure hunt was a feverish stream of ugly mental images; residents fighting residents fighting fishermen fighting art curators fighting a descending army of trafficked and exploited foreign workers overseen by a leathery crime lord. A blood stained anorak rolling in the surf. Me doing a vertiginous Roy Schneider dolly-zoom face. Someone said something edifying about fighting on the beaches, once, I believe.

I certainly arrived to a surreal scene that was as much traditional family seaside holiday as it was labour camp. A kind of throwback to when disappointing weather and a setting sun was no obstacle to our beaches being crammed full of families, together, fully present in the moment, buckets and spades everywhere. Yet with a peculiar mood of toil running through the throng, both purposeful and dejected. The usually glutinous and uninviting harbour sands all churned up like a freshly tilled field. Furrowed brows. You’re supposed to reap what you sow, so how much of themselves will the diggers invest? When do you quit on your chosen patch of sand? If you play the lottery with a specific set of numbers, you can never stop pouring money into that 1 in 14 million shot, because the week you don’t buy a ticket will be the week your numbers come up and your head will literally fall off and roll away. Just one more shovelful. They set out looking for a quick fix, a shortcut, and possibly just made a rod for their own backs

And then it’s funny to wonder what made that woman chose that particular spot in the first place, to get inside her psyche and to consider whether she, in turn, had tried to get inside the psyches of the people that hid the gold. It is very telling that the vast majority of the herd are clustered tightly together, at the highest point of the beach. Some are more intrepid and tread their own path down in the mire, among fishing boats that don’t quite look like gold mines these days. Some diggers are methodical and well equipped. Most of the kids are near-hysterical, utterly lost in goofy sandy abandon, showing far more commitment to maximum messiness than to fortune seeking, reveling in this palpable air of novelty. I half expect to see the galleon from The Goonies sail by. “Come on, guys, this is our time. Our last chance to see if there really is any rich stuff.”

I wonder what the main motivations are here. Do people want gold, do they want a work of art, do they want recognition, do they just want to feel blessed? Which of these is worth the most? Do they feel more connected to the community here, working shoulder to shoulder, or more locked in opposition to their neighbour than ever? One guy tells a BBC reporter, “It’s a consumer society and I’m skint”. True dat. I’m especially interested to know if any of them are the naysayers who dispute the fact that the Creative Foundation enriches their town, and if so I doubt that even lining their pockets with Triennial gold will keep them from burying their heads in that sand.

Meanwhile I’m the voyeur, standing by at one step removed from the artwork. Merely spectating, not really participating. The diggers have the distinction of actually being the work itself. That’s engagement. The puppet master might be a con man - we can’t be sure there is any gold here at all - but he’s lost the reins now anyway, the public will now perform the piece without direction, and their ad libbing could go anywhere. Maybe this thing will spawn an urban myth that mutates across centuries to become rumours of priceless Incan artifacts lost off the coast of Folkestone. It’s a disruptive and loaded performance which feels more genuine and less cynically motivated than many commonplace trips to the seaside now are, in this modern smartphone-iverse (if only the term ‘phony’ derived from iPhones). Recently I was lying on the beach at Sandgate after a  bracing and very real swim, when a group of teenagers showed up nearby, stripped down to bikinis, and spent thirty minutes solemnly and meticulously taking pictures of each other in various poses that ‘performed’ relaxing at the beach, then they got dressed and disappeared. At no point would I have described them as actually being at the beach.

I look forward to seeing whether the traumatized sands will be softened into new, beautiful patterns tomorrow morning, after the tide has come and gone. Perhaps it will bear no trace whatsoever of this evening’s activity, the ocean turning the artwork off and on again. I didn’t get sand under my fingernails this evening at Michael Sailstorfer’s Triennial piece, but I did go looking for something of value and I’d say I found it.