Back to Book Festival

Entitled The Shape of Things to Come  Folkestone Book Festival 2019 drew inspiration from the philosophy and spirit of HG Wells, who lived and wrote in Folkestone. The 2022 edition of the festival will take place in autumn. The festival is an annual invitation to gather, tell stories, exchange ideas and celebrate all things literary.

A short history of the Folkestone Book Festival

Folkestone Book Festival has its origins in the Kent Literature Festival which started in 1980 in the Metropole Arts Centre in Folkestone. This attracted many illustrious names including Margaret Drabble and Beryl Bainbridge, Ian McEwan and Ted Hughes, and also featured a number of authors such as Benjamin Zephaniah who were less well known at the time.

This tradition of bringing talented authors to Folkestone was taken up in 2002 by the Folkestone Literary Festival with Saga as its main sponsor and directed firstly by Saga Magazine’s Editor, Emma Soames, and then by Saga’s contributing editor, Camilla Swift. The Festival began to attract larger audiences using the Saga Pavilion and The Grand as its main venues. A £20,000 Saga Prize for Wit and Humour to a writer over 50 was introduced.

In 2005 the involvement of the local community was encouraged by the setting up of the Friends of the Festival. Founded by Nick Spurrier, the Friends offered concessions on Festival tickets, ran book reading groups, produced a regular newsletter and organised other activities. All money raised was used to support the Festival and sponsor particular events. In addition, the Friends provided stewards during the Festival, as well as assisting with hosting and introducing authors.

On the sale of Saga in 2006, its sponsorship of the Festival ended.  With Peter Florence, founder and director of the Hay Festival, as Festival Godfather and Ellie Beedham as Festival Director, it continued to attract interesting speakers and introduced features such as the History Weekend and more events for children and families.

Now under the auspices of Creative Folkestone, formerly known as Creative Foundation, the Festival continued to use a variety of venues in Folkestone, including The Grand, the Lanterns and the Leas Club. In 2009 the Festival, with Roberta Spicer as Festivals and Programming Manager, was able to move into a permanent home in the newly built Quarterhouse in Tontine Street.  At this time, its name was changed from Folkestone Literary Festival to Folkestone Book Festival. The Festival, once held in September, had now moved to November and has continued to be held at this time ever since.

In 2012, Geraldine D’Amico was appointed as the Festival Curator. She continued in this role for seven years, increasing audiences each year with an imaginative and varied programme of events, including international days, a children’s programme and a whole cast of authors on an eclectic range of subjects, many attracting capacity audiences. Not only were the audiences enthusiastic about the Festival, the invited authors too spoke warmly of the welcome they received in Folkestone. In a world where book festivals have proliferated since its early days, the Folkestone Book Festival has definitely established a first-class reputation among both audiences and authors.

The 2018 Festival was the seventh and last to be curated by Geraldine D’Amico and with 50 events was her biggest festival and attracted the largest audiences. From 2019, the Festival will be curated by Liam Browne and Seán Doran, whose DoranBrowne partnership runs the Arts Over Borders programme in Ireland and looks set to herald in a new and equally successful era for the Folkestone Book Festival. 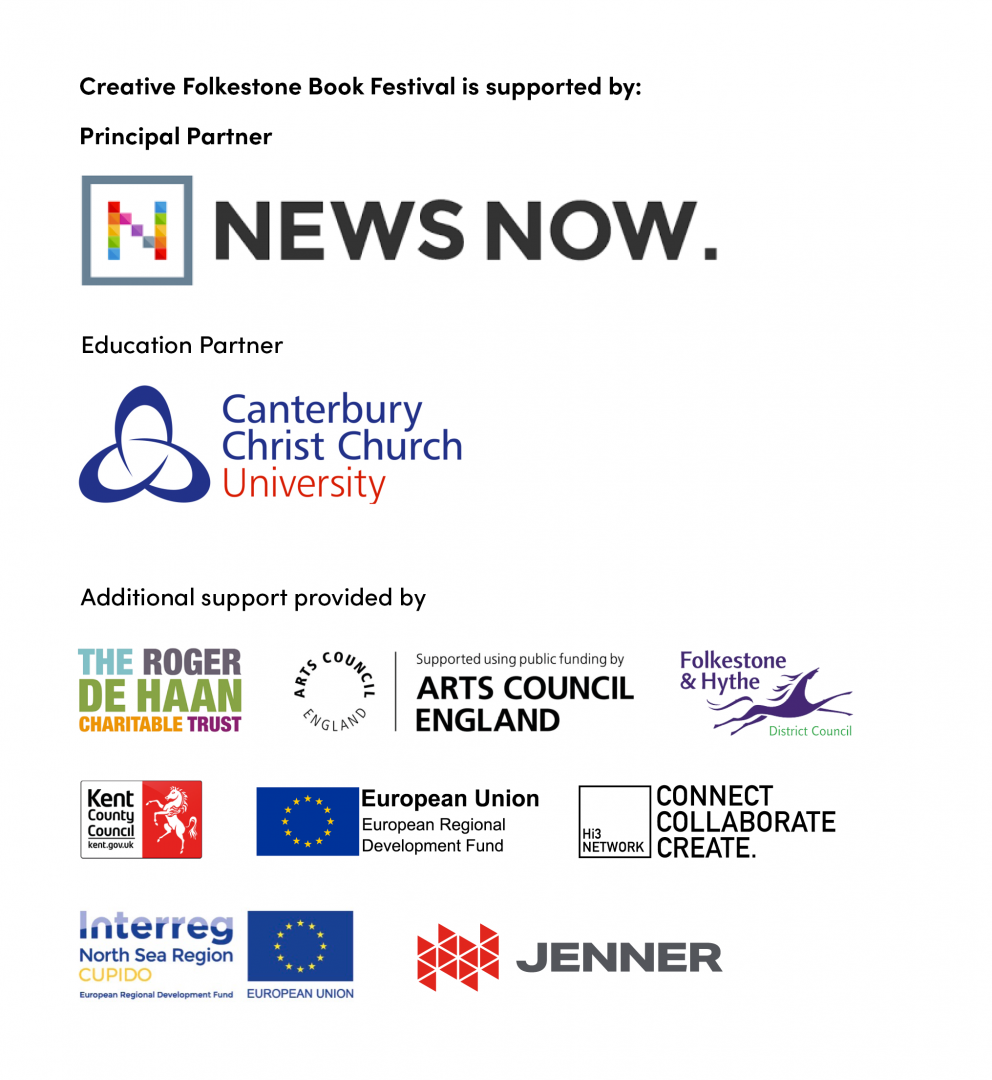