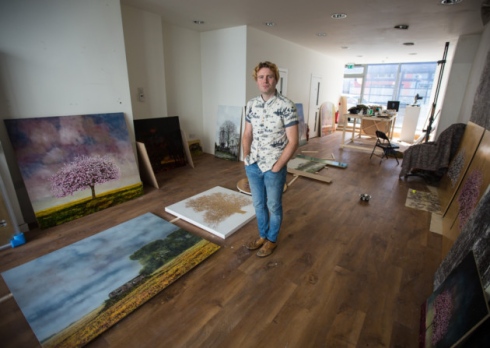 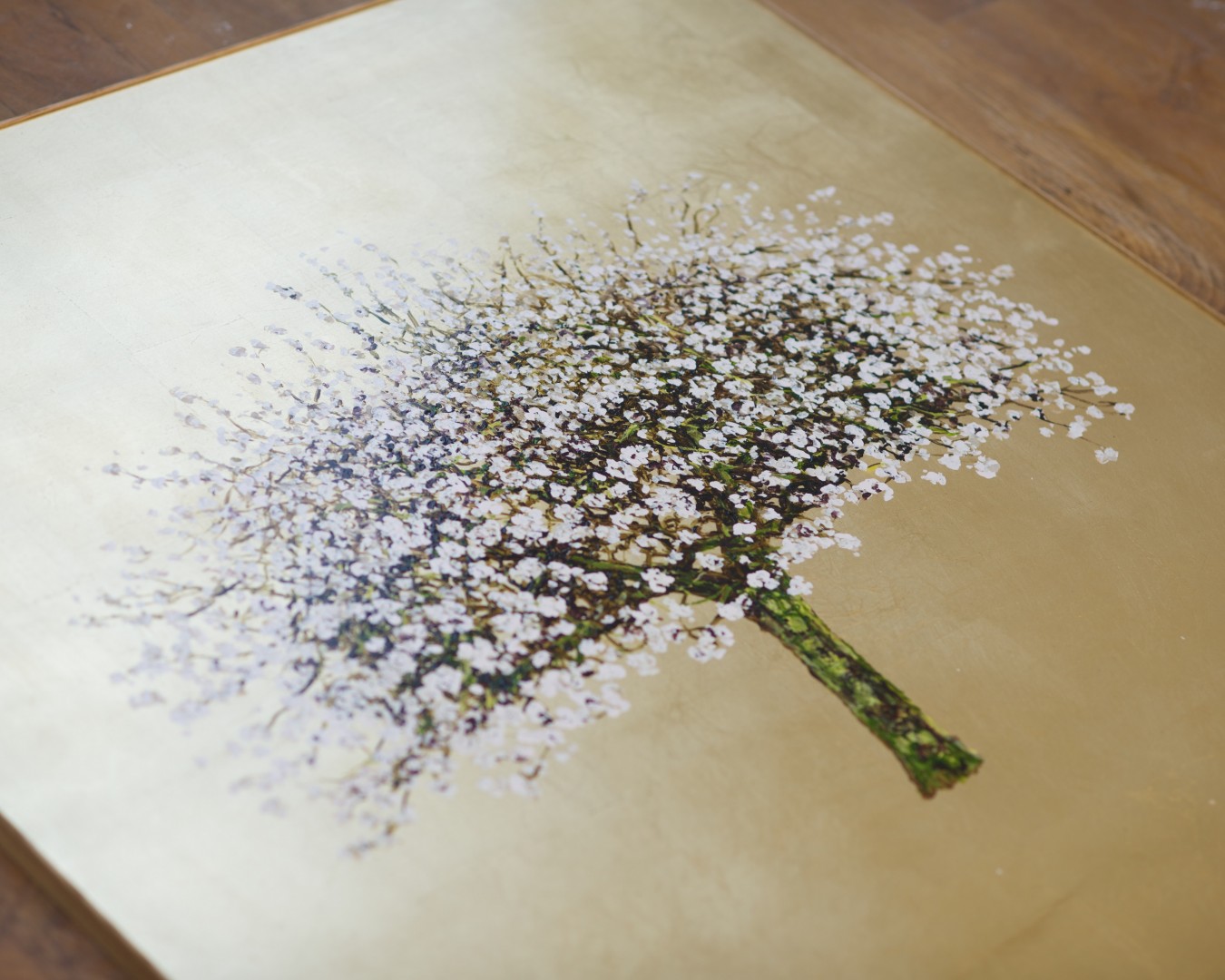 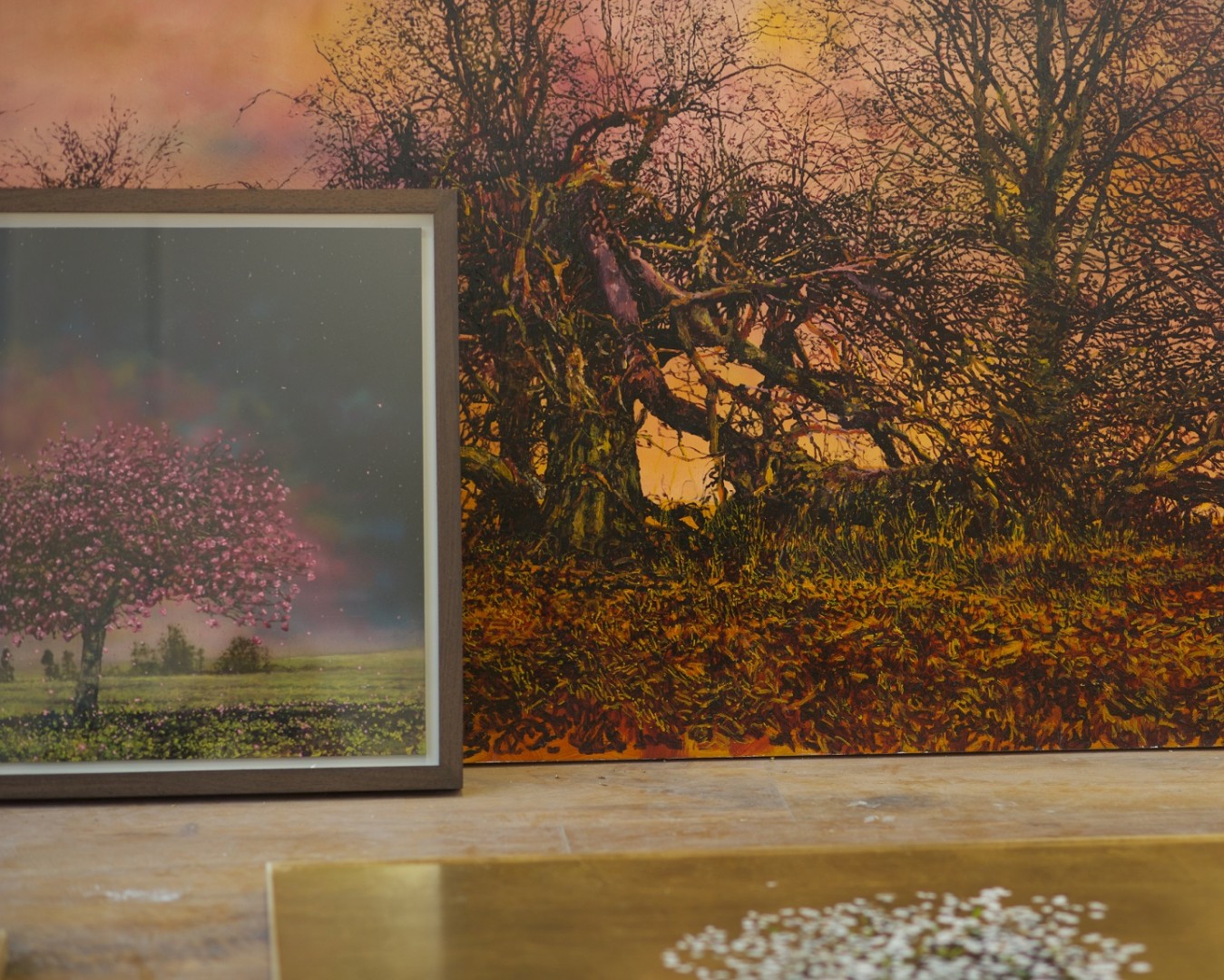 Generally speaking artists are people devoted to their craft, but with Jack Frame you perceive this is a passion.

I meet him at his studio in Folkestone’s Creative Quarter, where he has been for â€¨the past four months, after a stint of a â€¨year and a half in Ashford.

“It’s a transitory, nomadic existence” he laughs, as previously he was at the Glasgow School of Art and was in Scotland for 11 years. Hailing originally from Kent, near Lenham, he wowed his fellow students in his degree show by presenting a work of painting, now quite rare for an art school.

Around his studio you can see his art. â€¨On the floor there is varnish drying out â€¨on a series of stunningly beautiful works of cherry trees in blossom, on backgrounds â€¨of gold leaf. These are works which, he â€¨says “have gained notoriety.”

Jack adds: “People are interested in â€¨them as beautiful objects. You can work with real colour and make beautiful â€¨things, and I love beautiful things.”

He adds: “Beauty at art school was a dirty word, but it is a fashion which comes and goes. I love shiny, colourful things.”

A further bright piece of work, standing 6ft by ft, is his Elizabeth Tree, apparently an oak planted for Queen Elizabeth and some several hundred years old.

This work is painted on a perspex panel and Jack likes the luminosity this gives, rather like stained glass. As he says: “I’m obsessed with trying to get light through paintings, but I’ve always been attracted â€¨to working on traditional surfaces. If I could, I would work on canvas.”

Here, however, many of his paintings are on board, which predominates. “Scale is very important,” Jack tells me, “because a larger piece can be seen from a distance, while a small picture next to it will have â€¨an intimacy.”

Not all Jack’s works are quite so large â€¨and indeed around the studio I see several small studies. “There is something intimate about a smaller painting which you move closer to,” he says. “People have to take time with a small painting, so size gives â€¨a different function. For example, if you see a work on a postcard and then see â€¨the original, the change in scale from â€¨your expectations can surprise you.”

Jack is reticent about the time he spends creating a work and says he has “no idea” when an artwork is completed. “Sometimes I will walk into a gallery and see a painting that needs more work … or is overworked!”

Nor is Jack terribly certain about which of his projects has been the most exciting. “It changes every day. The memory of work is a funny thing.” He works with a series of notebooks in which he writes rather than sketches and explains: “When I start a new project, I sit down and think about what excites me, the colour and how I can move it around the canvas.”

Jack shows me around the studio. There are paintings of an oil refinery, a silo, a windmill, a tin mine, a rose garden taken from a photograph done by his grandfather. “But I’m remembered for the trees.”

These remind me of George Shaw’s strangely bleak paintings of suburban Coventry, in Humbrol enamels, but â€¨Jack’s paintings do not have the same bleakness. Shaw is one of Jack’s artistic heroes, however, and he admires his â€¨“sense of place and nostalgia.”

Jack also likes Samuel Palmer, and of course Turner and Constable and admits to being an avid listener of documentaries while he works, a favourite being Robert Hughes’ The Shock of the New.

Jack appreciated his time in formal art training, a space in which to escape the world and immerse in a practice you love with people with the same interests.

“You learn what not to do, and that â€¨can’t be anything but a good thing.”

His time in Glasgow showed him a different side to the country and coming back to Kent he would walk the fields, observing the trees. He likes the fact that Kent offers easy access to London, where he shows at The Cube gallery in Mayfair.

Jack gave a lot of thought to my question on how to counsel an art student starting out. “Have courage. It’s difficult because you don’t know what it’s like until you do it. There are issues about funding and you have to make sales: you’re opening yourself up to despondency and worry.”