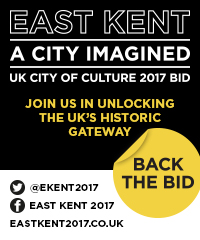 When I think of a city it has houses, schools, people, churches and then some grander buildings like a cathedral, some museums, galleries and theatres along with public parks. But if I imagine a city, and really let my imagination run wild, it would have all those things but also great big open spaces like fields between buildings and round the edge it would have a coast with beaches and harbours with fishing boats.

East Kent has put in a bid to be just such a city that could win the prize to be UK City of Culture in 2017. Now, if you think about it, it takes less time to drive across our region than it does to cross London; East Kent has a population of 600,000 which is more than Liverpool; and in Canterbury there is a cathedral which used to be the true mark of a city. Equally importantly East Kent is within the rules of the competition to call itself a city.

This is what makes the bid great.  On the face of it East Kent as a city is nuts but once your imagination runs away with you our city, this city of imagination, has much more to offer than any other city in the UK could ever have. It is exciting not to be tied down by the limitations of traditional city limits, which means that the East Kent bid, which starts as the competition long shot, the rank outsider, has the ammunition to win because our city can be so much more than anyone else’s.

We also have the track record. Across East Kent, from Margate with the Turner to Folkestone with its Triennial to Canterbury with the Marlowe culture has been used to drive change, improve the urban environment, unite people and improve the economy.

These last few weeks I have been in meetings trying to shape this bid and instead of the normally dreary, bleary affairs of agendas and minutes they have been remarkable occasions as the County Council, all the District Councils and the region's arts and cultural organisations have been working together to see what ideas can work. It's important too, that while the cultural opportunities have expanded greatly over the last ten years in the region we must have plans for the next ten if we want this to continue. The prize is worth fighting for as with it comes the opportunity to tell the country about our corner of Britain and in doing so attract significant financial investment to East Kent.

And just as importantly, having lived in Liverpool when it was European Capital of Culture, I can tell you these things are great fun. People come together to make art and to enjoy it; to create and celebrate our culture.

I'm backing the bid and I hope you will.

Chief Executive of the Creative Foundation