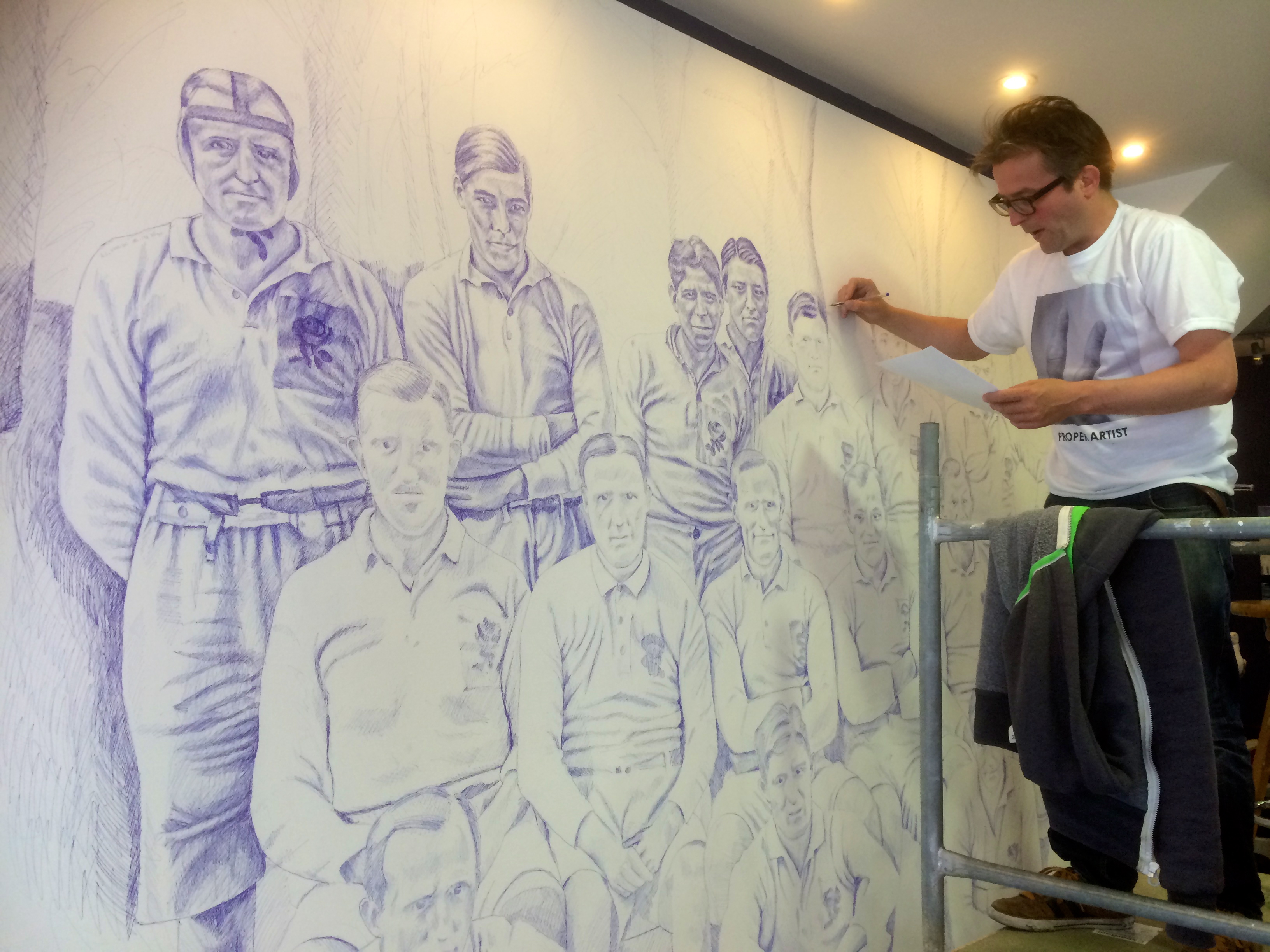 This month we celebrate artist Shane Record’s tenth year with a gallery space in Folkestone Creative Quarter. As a long-standing and enthusiastic member of the arts community we invited Shane to reflect on his time in the Creative Quarter, to reveal where he started, his journey as a professional artist and how Folkestone has changed over time.  Shane’s story is both enlightening and inspirational and we look forward to his response in another ten years. The Shane Record gallery can be found at 21 The Old High Street.

"At 26, I’d tried to be a professional artist in Berlin and came back after three years having pretty convincingly failed at the attempt, and thought it was time to forget this dream of being an artist and to settle into some sort of more mainstream job. After all, who makes a living out of art?

I worked for a few years in different jobs, but somehow couldn’t give up on painting. Every weekend I’d be out with my easel and began to nurture a shaky belief that maybe, if I focused enough on it, I could one day turn professional. When I was 28, I started working part-time and set myself a task of painting 100 paintings. I reasoned that by the end of that I’d know whether I might be good enough or whether it was time to forget the whole idea.

My problem was that of space – I didn’t have a studio. As chance would have it I bumped into a childhood friend who I hadn’t seen for years (Simon Mohr) in the supermarket early in 2003 and moaned about my situation. It turned out Simon was working out of a small office in The Old High Street in Folkestone for a little-known organisation called the Creative Foundation. He told me they were in the process of acquiring property with the objective of renting them out to artists in order to breathe some life into the dilapidated older part of Folkestone.

A few months later I was renting my first flat from the Creative Foundation at the end of Tontine Street, working part-time to cover my costs and continued turning out painting after painting. I got involved with the Open Air Gallery – a group of artists that exhibited outside in the Old High Street once a month and started getting my work seen. Then I saw that the Creative Foundation was allowing artists to exhibit in the windows of the increasing number of empty shops it had acquired. Soon after I’d got hold of the keys to a few of these buildings and with the help of fish eye hooks and fishing wire I was hanging my work in several of the windows down the Old High Street, and I put my phone number somewhere in the display.

By late 2004 I was about two thirds through my ‘100 paintings project’ and people started contacting me to arrange the purchase of many of the paintings. This continued with increasing interest right through to the spring of 2005, and for the first time, the income from my paintings was equalling that of my part-time work. It was time to make a choice.

By this time a few shops had opened in CF properties and I was now living above an empty one, so I took the plunge. I quit all work outside of painting, went to the bank and agreed a £7K overdraft, rented the little shop below where I was and moved my studio into it. That was 10 years ago.

Many people I knew doubted my sanity, and others said that even if I did make it work I’d soon be sick of painting full time if I did it professionally. But I actually loved every minute of it. I initially sold 8 different prints and continued to turn out paintings of Folkestone at quite a rate. This would be the case for several years.

The street started to flourish and I was proud to be part of the regeneration of the old town. In 2007 I moved into my current premises. But things took a turn for the worse. When the economy sank into recession the fortunes of the street changed and many fledgling businesses struggled to survive. I hung on – but only just – and took to exercise and playing the piano in a bid to remain positive. After all, who wants to support an artist who is down in the mouth?

Then came an unexpected challenge – in about 2010 I got repetitive strain injury in my right hand from painting with a palette knife. My right hand had started to seize up. What was I to do? I remembered that I had apparently started out a left-hander but my school had frowned upon left-handed children and I’d been encouraged to write with my right hand.  It made me think that perhaps I could give painting with my left hand a go, making sure nobody knew – after all, if people heard about it and recognised the lapse in quality of the work it’d be pretty understandable they wouldn’t want to buy it anymore. I continued drawing with my right hand but painted with my left (I grinded the palette knife on an electric sander to make it left-handed) – which I was to do for about a year until my right hand recovered. I initialised each painting with “MG” on the back somewhere – meaning “Main Gauche” – Left Hand – in French. Thankfully no-one noticed – in fact, many people told me I’d improved!

The economy has recovered substantially from the very dark times of a few years ago. The continued investment in the area from the Creative Foundation and the private and public funds it has leveraged promises the town a great future. The establishment of so many heavyweight events such as the Book Festival, the Triennial and the fantastic programme offered by the Quarterhouse demonstrates the Creative Foundation’s commitment to the local community. You only have to look at the Harbour Arm’s recent opening and its great reception to believe that, at last, peoples’ perception of Folkestone is changing.

I slowed my pace of producing original oil paintings right down, spending much longer on each one, and I like to think I’ve improved. Now I have a range of well over 300 prints in many formats and sizes, and have been asked to do all manner of commissions, the most notable of which was a life-size painting of the entire 1914 England Rugby team to commemorate the players that fought and died in the First World War which hangs next to the Royal Box permanently in Twickenham Stadium. There’s plenty more in the pipeline too. The video work I’m doing is becoming more prominent and I’ve started doing a few digital paintings… But for what it’s worth, I’ve been very fortunate that people have continued to buy my work and I’d like to thank everyone who has supported me over the years”.

More information about Shane Record and his work can be found at www.shanerecord.com