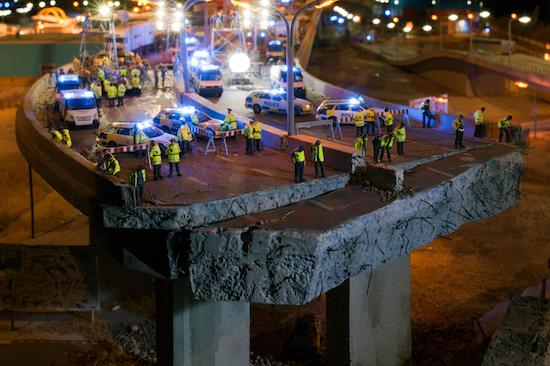 Housed in a 40 ft shipping container, The Aftermath Dislocation Principle (ADP) is a monumental post-riot landscape in miniature. This dystopian model village is set somewhere in Bedfordshire, where only the police and media teams remain in an otherwise deserted, wrecked and dislocated land – all in 1:87 scale and viewed through peepholes in the side of the container.

The origins of this piece lie in a series of works known as A Riot in a Jam Jar (L-13, 2011). Here Cauty constructed tiny scenes of a riotous nature inside upturned jam jars in which violence, humour and socio-political commentary vied for position in contained and domesticated bite-size portions. Likewise, The ADP in a Shipping Container plays out its viewing requirements according to the nature of its construction – not this time for mantelpieces, display cases and gallery plinths but as a totally self-contained off-grid artwork that can go anywhere, to be where it is needed, to seek its audience.

As part of the tour Folkestone has been invited to create its own exhibition of protest jars and it couldn’t be easier! All you need to do is grab a jar and visualise your grumblings. Your protest can be funny, sad, insignificant, serious and can be drawn, printed, modelled or even found. Put your name and contact details on the lid and deliver it to one of many drop off points in Folkestone’s Creative Quarter including Steep Street, The Dirty Pen, Feral Child, Eakins, Inspiring Interiors and Hot Salvation. When the tour arrives the exhibition will be revealed starting at Street Coffee House. All entries should be completed and handed in by Sunday 7 August.

The ADP will be placed on The Leas close to the bandstand with the official launch taking place on Monday 8 August at 4pm. The container will remain in place until Monday 15 August.

Watch the trailer here and join the Facebook event here.