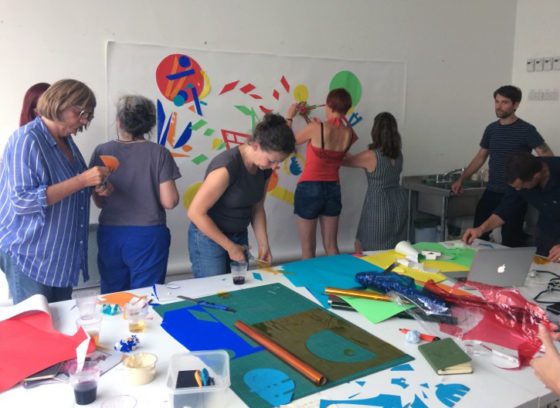 Block 67 is the Creative Foundation’s studio space at 67 Tontine Street. During Folkestone Triennial 2017, Block 67 will host a programme of artist led workshops, talks and events that embrace exploration, play and creativity.

In July 2017 Block 67 held some twilight sessions for teachers, an opportunity for educators to see a preview of the Folkestone Triennial Artworks and discuss how schools and colleges can engage in visits, workshops and online resources.

These sessions also included a demonstration and workshop by Lydia Hibbert from Young Animators Club. Lydia will be based in Block 67 as part of Folkestone Triennial from 4 - 10 September, running experimental animation workshops for Primary and Secondary schools plus a Family Drop-in session at the weekend.

The films created during these workshops were inspired by the work of Sinta Tantra. Her painted design titled 1947, will transform 'The Cube' in Tontine street with colours she found in a poster from 1947, that promoted rail travel to Folkestone as a holiday and tourism destination after the difficult war years.