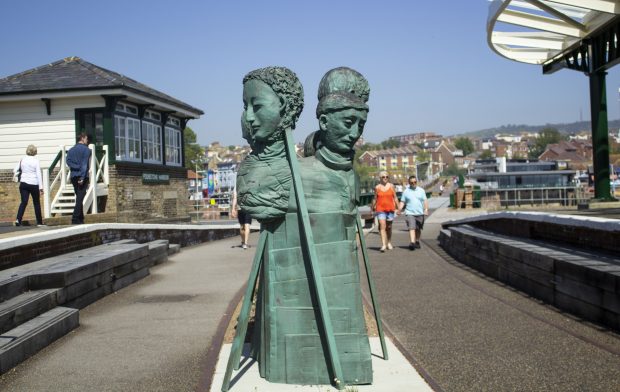 Situated on Folkestone’s old harbour station sits Paloma Varga Weisz’s Rug People (2011). Depicting five intertwining heads seemingly held together by an imitation of sticks and cardboard that once sat upon a rug placed over the slowly rusting railway tracks, this particular sculpture strays from her typical and more common pieces that use woodwork and ceramics.

As the faces hold a somewhat thoughtful expression, each intertwined and facing different ways, a question that should be asked is: are they looking to the present or the past? It is reminiscent of the tumultuous war-torn past that Folkestone had operated through; against the green sea and the grey walls, the installation stands proudly against the dulcet movement of people, both travellers and locals.

This is exemplified further in the significance of the sculpture’s surroundings. The station is an example of the role Folkestone had played during World War One, when approximately 120,000 refugees landed from Europe.The bravery of those soldiers and civilians is clear, among the faces of the five. They represent the many faces of those that had travelled to Folkestone in hope of asylum, as well as the soldiers of World War One who were en route to France.

The importance of this artwork is fundamental for the story of the harbour arm. As the site had recently regenerated after being derelict and dormant for years, the statue no longer stands upon the rug that had concealed the tracks. By removing the very item in which the sculpture shares its name, Varga Weisz has created a piece that is a link between the past and the present. It is an intriguing piece, as the faces maintain the same solemn expression. It paints an image of over a century’s worth of pain, triumph and camaraderie. Its stands as an emblem of the forgotten, from years ago.

By Casey Davidson, written as part of FOLKESTONE IS AN ART SCHOOL