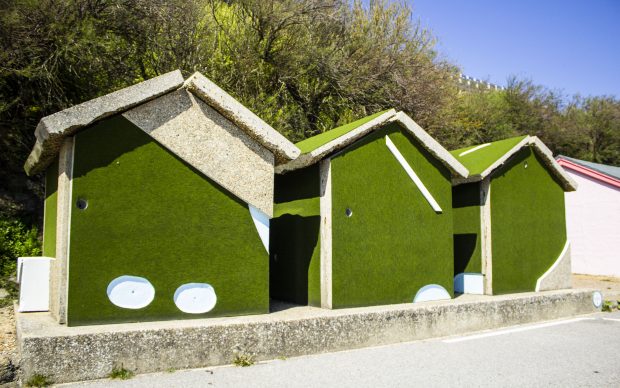 As a permanent artwork installed as part of the first Folkestone Triennial, ‘Tales of Time and Space’ in 2008, 18 Holes by Richard Wilson is a part of Triennial history.

However, the artwork was central to Folkestone’s seafront long before 2008, and indeed tells a tale of both time and space. 18 Holes is comprised of three unconventional beach huts  which Wilson created through his repurposing of the disused crazy golf course that was formerly a part of the Rotunda Amusement Park. Six concrete slabs, all from the original golf course, form each of the beach huts, which are located only a few hundred metres from the Rotunda’s original site. 18 Holes demonstrates the transition from one era of regeneration in Folkestone to another; the initial construction of the Rotunda to its eventual demolition, and the birth of the Triennial, which awakened a new interest in Folkestone and a new generation of visitors.

Perhaps the beauty of this work is not in its outward appearance, but in its history. The beach huts, although brightly repainted and dominated by pale blues and lush greens which fit their seaside surroundings, are redundant; neither working beach huts nor functioning crazy golf holes. They are friendly, but imposing and industrial. They fit their surroundings but they also feel foreign. They are an imitation of what once was.

These contradictions counteract the playful nostalgia of Wilson’s work; 18 Holes is, in essence, a tribute. It is a tribute to Folkestone’s past, and a visual appreciation of its history as a traditional seaside town and it has played a leading role in the reinvention of Folkestone in both the present and future.

By Reuben Jenkins, written as part of FOLKESTONE IS AN ART SCHOOL.