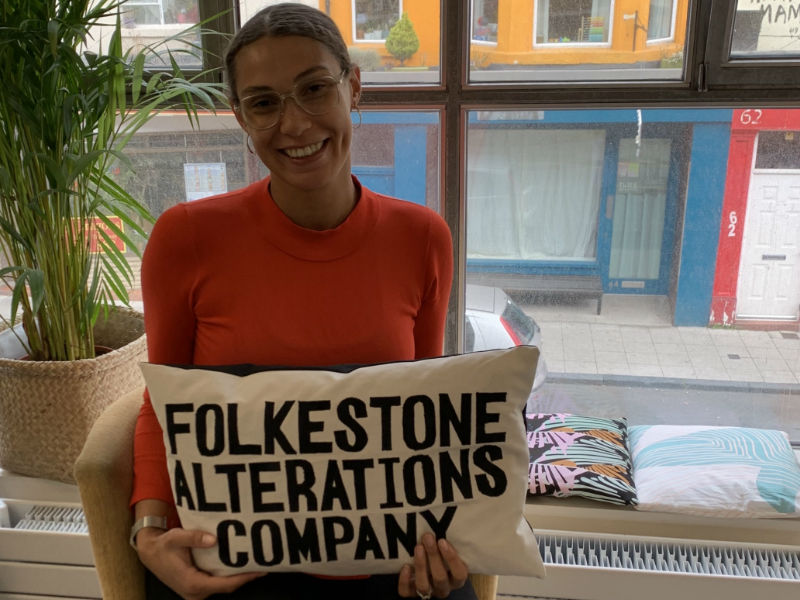 Sophea Liles is a costume-making graduate, specialising in men’s tailoring.  She trained with the English National Ballet in tailoring and has made costumes for the most famous of West End shows.  Sophea has been living in Folkestone for two years and has achieved her goal of opening the Folkestone Alterations Company on Tontine Street.  Folkelife wanted to find out why Folkestone was the place for her to realise her dreams.

“A few years ago, I came down to Folkestone for a filming project – The Fight, with Jessica Hynes.  I work, and now share a studio, with Jessica’s sister, and this was a project that I really enjoyed working on.  I just loved it here, I’ve never lived by the sea, I’ve always lived in London, but I welcome the change of pace, and the change of lifestyle living here.  Commuting to London still happens, and when theatres start up again that will continue.  However, I have such a lovely big studio space here to work, in a perfect location, it’s all pretty perfect really.  Things have just fallen into place.”

“My specialism, from my degree and onwards, has been in men’s tailoring.  I’ve made lots of suits, lots of coats.  Over the last year or so, I’ve moved into women’s wear and surprised myself at loving the frills and flowers, particularly in historical dresses.  The reason why I’ve set up as an alterations company though is for the past 5 years I’ve been doing alterations for West End shows, Les Miserables, Phantom etc.  I’ve really enjoyed it.  It’s also so important as the mentality of people is changing.  People want to keep hold of their clothes and alter and repair items to prolong their life.  Slow fashion is important, you can bring things to life again, rather than throw it away.”

“When I came down to work on Jessica’s film, I can remember it being really cold and refreshing.  It was so nice to be here.  I then went off to work on the MTV Awards and the European Music Awards and there were so many people from Folkestone working there too.  We’re all connected!  I’d been working with another friend from London on costumes and they were linked to Folkestone too.  Lee from Dr Legumes is a friend also, and my husband and I thought we’d pop down to see him, and Folkestone and then moved not a month later.  We’ve now put an offer on a house so we’re definitely staying!

“My husband is a carpenter for the theatre and works freelance.  Just last week he was doing the Banksy Plinths here, and he’s making a bed for someone too.  With the collapse of the theatre at the moment we’re in a period of change.  He’s also doing a counselling course and could base that work from home.”

“We have absolute faith that our businesses will work in Folkestone.  There’s such community support here for people wanting to make a go small independent businesses.  News of The Folkestone Alterations Company has spread by word of mouth at the moment, and there have been lots of offers from people of help for various things.  I know that wouldn’t have been the same in London, but we made the decision to come here and the strength of community is here.  It was the most natural move to make.”

This article originally appeared on FolkeLife