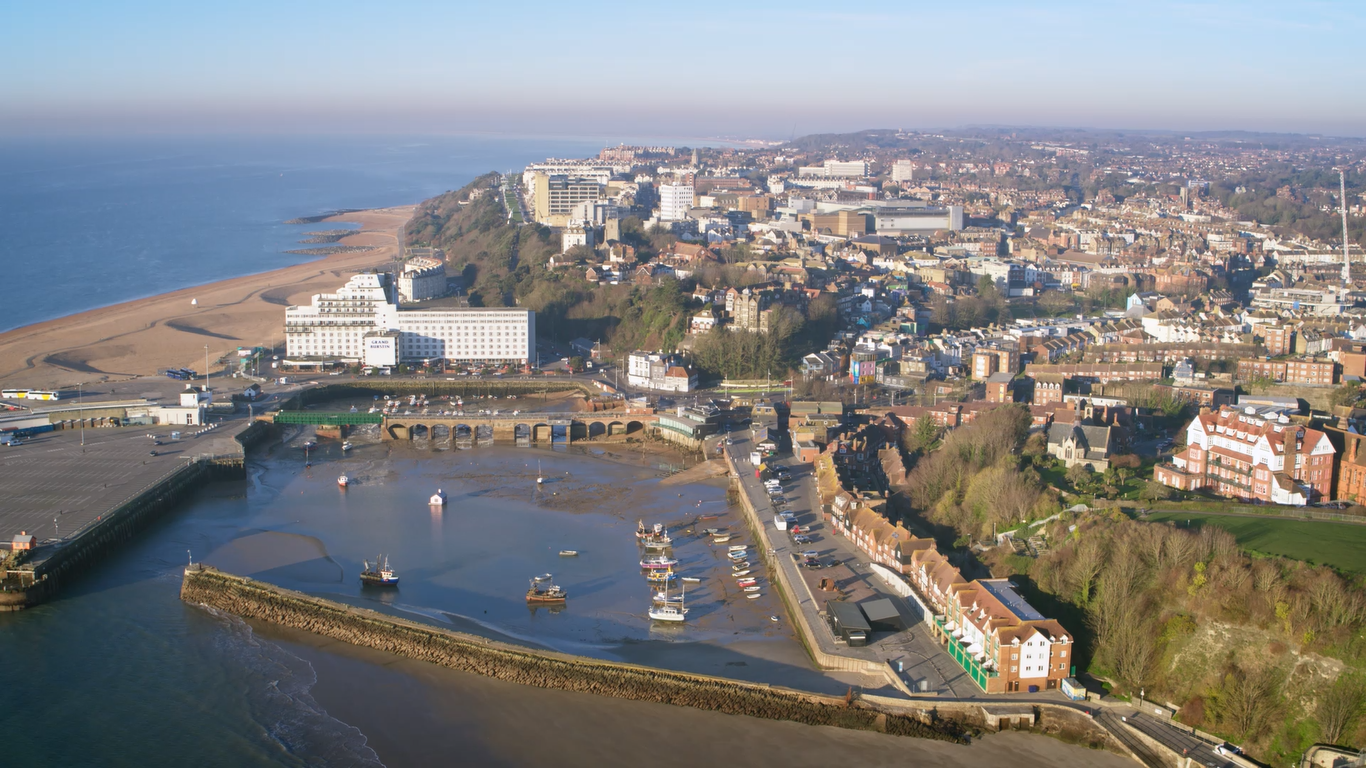 We’re super excited to announce details of the artists participating in our fifth Creative Folkestone Triennial, The Plot, which will run from Saturday 5 September – Sunday 8 November 2020. We have commissioned twenty artists to create new site-specific artworks across Folkestone, inviting you to explore the town and its urban tales.

The artworks will be sited along three routes associated with particular stories: the streets associated with physician William Harvey, noted for his ‘discovery’ of the circulation of the blood; St Eanswythe’s watercourse; and Folkestone’s industrial road ‘The Milky Way’.

Encouraging viewers to question the gap between fact and fiction, and what ‘place-making’ really means:

‘‘Although set in Folkestone, the exhibition’s theme is a universal one, prompting us to consider the relation between stories and material realities everywhere in the world. Everyone becomes aware at some point of the gap between our lived experience and what is narrated about it. Sometimes this gap is so extreme that we assume it is the result of malice – it’s a plot. With conspiracy theories becoming ever more popular, it’s never been more urgent to think about the gap between the talk and the action, between our stories and our realities…” Lewis Biggs, Curator of Creative Folkestone Triennial

Artists selected for Creative Folkestone Triennial 2020, The Plot, are:

Rana Begum (b. 1977, Bangladesh), who will create a special colour scheme for the replacement beach huts on Lower Saxon Way. Set with the challenge of encompassing the whole promenade in her scheme, Begum’s designs will reflect her studio practice – often concerned with geometry, colour and light – to create intriguing results.

Co-commissioned by England’s Creative Coast, a landmark partnership project connecting the landscape and arts organisations across the South East coast, artist Pilar Quinteros (b.1988, Chile) presents Janus’ Fortress: Folkestone - a monumental sculptural head sited on a cliff top that looks both outwards at Europe and inward to England, contemplating the mixed fortunes of what connects us but what also divides us.

Sam Belinfante (b. 1983, UK) will create a mobile sculptural performance that moves across several key moments around the town throughout the duration of the exhibition. Performers will sing duets, whilst carrying netting from one place to another, referencing many of the unusual physical interconnections across the town.

Stephenie Bergman (b. 1946, UK) has been working in Morocco for more than a decade. For the Triennial, she is contributing abstract sculptures that play on the forms we associate with medicine – from pills to organs, veins and arteries; that will adorn overlooked pathways around the town.

Patrick Corillon’s (b. 1988, Chile) series of five sculptural relic-boxes are inspired by a group of local residents. Located on the course of St Eanswythe’s water, the boxes and relics refer to children’s games and St Eanswythe herself - the patron saint of Folkestone who is said to have made water run uphill. This work is co-commissioned under the Nouveaux Commanditaires programme of the Fondation de France, and curated by Artconnexion (Lille).

Located at the central library, Shezad Dawood (b. 1974, UK) presents Leviathan Legacy 2 - the second element of his VR trilogy. Leviathan is a major five-year multifaceted project that looks at the intersection between climate change, migration and mental health. The work is part of UP Projects’ digital commissioning programme This is Public Space, supported by a grant from the European Union CUPIDO fund.

Sculptor Richard Deacon’s (b. 1949, UK) Benchmark nos 1-5 is a result of his preoccupation with plinths and the crucial role they have played in the development of sculpture. In researching his contribution to the Triennial, he discovered five existing platforms in the scenic Kingsnorth Gardens. The welcome of these empty platforms inspired him to create five new sculptures in granite.

After researching the Ship Street Gasworks site, Jacqueline Donachie (b. 1969, UK) was inspired by the social club that remained on the derelict site long after it ceased production. Titled Sunday Morning, Donachie’s contribution to the Triennial will be a sculpture that celebrates the dance floors of Folkestone; as well as a film documenting a line dance indigenous to Glasgow called The Slosh.

Taking inspiration from the Rotunda amusement arcades that drew crowds to the beach until the 1990s, genuinefake (Rachel Stella Jenkins) (b. 1983, Mozambique) proposes a pavilion near the site of the flying-saucer shaped buildings from which the Rotunda got its name. Inside, themed games and crazy golf will address significant contemporary topics that affect both local residents and Europe’s wider population. Conceived as a contribution to the ongoing programme of Urban Room Folkestone (commissioned for Creative Folkestone Triennial 2017), Fortune Here aims to amuse and engage people in considering how citizen’s rights, responsibilities and sense of empowerment may have been replaced by a consumerist culture of gambling (luck or fortune).

For Creative Folkestone Triennial 2020, celebrated artists Gilbert & George (established 1967) will contribute their powerful imagery to billboards and poster sites around the town.

Inspired by The Leas bandstand, which provided a musical rhythm to the life of the west end of Folkestone for many years, Helga Griffiths (b. 1959, Germany) presents Oscillations. Made from Moebius-strip ribbons of continuously moving LED lights, and driven by a real-time digital link to the tides in the Channel, the installation will occupy the rarely-used bandstand. Griffiths uses red and blue so that, in addition to the tides, her artwork references the circulation of the blood (veins and arteries) and of the traffic and water in the town.

Mariko Hori (b. 1985, Japan) was inspired by Folkestone’s zig-zag path, built in the 1920s from Pulhamite to appear as natural rocks and grottoes. Pulhamite is a fake rock surface encasing inorganic slag, which, after a century, is wearing thin and beginning to expose the rubbish within. In her work, Mellowing the Corners, Hori will create Pulhamite ‘boulders’ on three different sites, containing objects donated by residents, instead of rubbish. The boulders will act as a time capsule in the future as the objects gradually become exposed.

Christopher Houghton Budd (b. 1948, UK) proposes a new town centre in Forgiving Light. The artist took his cue from the traffic signs on the outskirts of Folkestone indicating ‘town centre’, observing the reality that there is no concrete understanding of where the ‘town centre’ is located. Houghton Budd’s conceptual intervention is manifested through a circle of light, marking and renaming the original centre of the town (the point where The Old High Street crossed the Pent River on a bridge to the fishing village) as Central Plaza.

At the Harbour Arm, Atta Kwami (b. 1956, Ghana) presents sculptures that are 3D paintings, incorporating his signature use of colour and abstract painting style. A published author on urbanism and the history of African modernism, Kwami will use his knowledge to place the traditional home-made street vending kiosks of West Africa in dialogue with the commercially produced food-vending kiosks indigenous to East Kent.

Morag Myerscough (b. 1963, UK) proposes to utilise the wraparound ground level exterior wall of the F51 building, which is around 75 metres long and 4 metres high, to create a vast mural in her usual dynamic and playful style. Myerscough would collaborate with residents on phrases and images to ensure that her mural will announce the building at street level in a way that matches the excitement of the interior spaces.

Jacqueline Poncelet (b. 1947, Belgium) will create Looking Ahead. Piercing the retaining wall of the old Ship Street Gasworks site, she will insert a variety of lenses including those which mimic bee-eyes and mechanically operated kaleidoscopes. Passers-by will be invited to peer into the site and beyond – towards the railway viaduct, the hills, and the future.

Mike Stubbs (b.1961, UK) presents Gas Guzzler - a memorably customised vehicle which dramatises the role of fossil fuels in climate change and plays with the hierarchies of the motor industry. The work is presented in association with the new F51, an internationally leading-edge multi-storey skate and extreme sports park by Hollaway architects.

Best known for his digital drawings produced on an iPad, Jason Wilsher-Mills (b. 1969, UK) also creates 3D figurative sculptures about the world he experiences as an artist with disabilities (caused by a disease of the blood cells). Produced by Shape Arts as part of the Adam Reynolds Award, Wilsher-Mills will create a figurative sculpture in conversation with the monumental statue of William Harvey, son of the Mayor of Folkestone, Royal Physician and discoverer of the circulation of the blood.

The German artist duo Winter/Hörbelt (established 1992) contribute a strikingly monumental sculptural intervention to the Shellons Street crossing, a key location in the urban landscape. In doing so, they also memorialise St Eanswythe’s water by transforming a dead tree into a fountain. In creating a sense of excitement, and even confrontation, the artwork will illuminate both the historic and the future significance of the crossing.

In 2017, Malaysian artist HoyCheong Wong (b. 1960, Malaysia) contributed two strikingly beautiful (temporary scaffold) minarets to the façade of the Islamic Cultural Centre on Foord Road South. His relationship with the organising committee of the Centre has continued to develop, and now he, with artist Simon Davenport (b. 1984, UK) and architect Shahed Saleem, are contributing a new artwork for the Triennial, as well as producing an exhibition that envisages a possible future development of the mosque building.

Creative Folkestone Triennial 2020 is supported by: