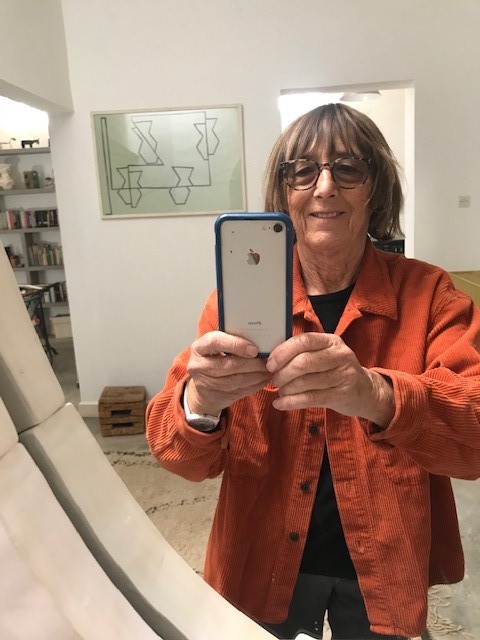 Stephenie Bergman was born in London 1946 and studied painting at St. Martin’s School of Art.  Her first solo exhibition was in 1973 at Garage, Covent Garden, London.  Many solo and mixed exhibitions followed and her work is in many public collections.  In 1985 she moved to Ollioules, S.France and in 2006 she moved to Taroudant, Morocco.

Her early wall-hung works were made by sewing together large pieces of dyed and painted canvas. Deep spatial configurations contrasted with the tactile presence of the material. Coloured shapes floated across the surface and the straight seams pulled the canvas together like a tight drawing.

When looking for a more rigid material to work with, she tried out clay. By constructing flat slabs cut into shapes she discovered she could palpably realise ideas from her imagination. Sometimes these were playing with shifting volumes- sometimes they were motivated by a specific function and sometimes they were simply linear statements.  By adding one element on to another, she made very tall ceramic pieces including a 3 metre sculpture in a stairwell in London. She has made vases, tiles, lights, screens, candlesticks, frames, garden objects and funny storage systems. Her studio in Morocco is a mud-built farm building and she has inserted several clay panels into the walls to hold specific objects such as hat and shoe holders and a huge ladder holder.

Working with ceramics, Stephanie Bergman will create sculptures for Folkestone Triennial that play on the forms we associate with medicine – from pills to organs, veins and arteries. Some of her sculptures will adorn the Dover Road Health Centre and others will be strategically placed on the underappreciated ancient stepped pathways around the town.