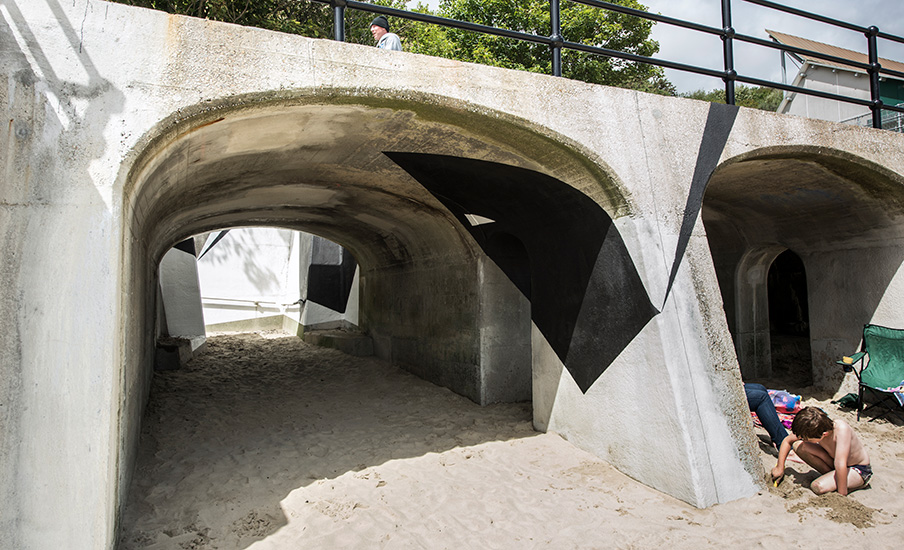 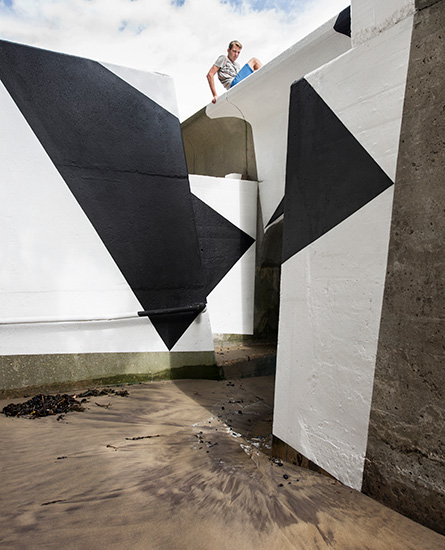 Cézanne proposed: ‘treat nature by means of the cylinder, the sphere, the cone’. Woodley’s ‘impingements’ are concerned with the interaction between ideas and reality, how a ‘platonic’ form can be in dialogue with a physical architectural space. No. 66, takes two of the simpler geometric solids (four and six sided) and ‘projects’ two pairs of these figures onto and through Coronation Parade (a cliff-stabilising structure, between landscape and architecture). Starting with two cubes (depicted in white, spaced one cube apart) the two tetrahedra are the same size and painted in black, whilst the cube that circumscribes its tetrahedron has been stretched to encompass it.

Gary Woodley works in many three-dimensional media including architectural interventions using various lighting technologies. Has been researching three-dimensional CAD modelling systems for topological projections onto real and virtual spaces. For a number of years, he has been making exquisite wall drawings called impingements that play with our perception of the surfaces and edges of architectural space and conceptualise sculptural volumes within the mass of the walls.

Woodley has been making exhibitions from his impingements since 1984. He has had individual and group exhibitions in Japan and throughout Europe, including Schloss Buchberg, Austria; Konkret Zehn, Nürnberg, Germany; Scavi Archeologici, Verona, Italy; Galerie Lydie Rekow, Crest, France; Cairn Gallery, Gloucestershire and Galerie Hoffmann, Friedberg, Germany.  He has made permanent commissions for, among others, Allianz, at Treptowers, Berlin, and Dresdner Bank, Kurfürsteneck, Berlin, and his work can be seen in collections in Germany, France and the UK.