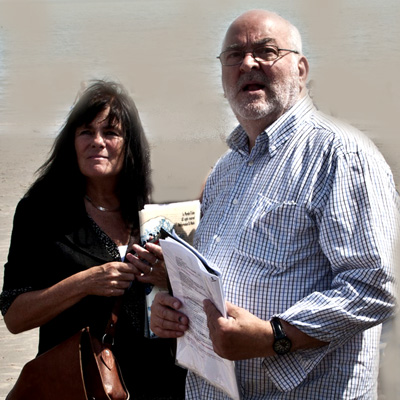 Pavement Pounders Community Interest Company is run by Maryanne Grant Traylen and David Lay. Maryanne is a published writer and editor of journals. David is a visual artist and teacher. They worked together initially to devise and deliver guided walks and talks for English Heritage and the Hampstead Garden Suburb Institute.  They set up Pavement Pounders in 2010 as a vehicle for their Pride of Place Project: “Exploring the heritage on our doorstep”

Between Storms Folkestone's heritage as a port. The period will be 1703-1987.   It was the great storm of 1703 which destroyed the town's fishing fleet and signalled the need to build a harbour.  The channel ferry Hengist ran aground near Folkestone in the great storm of 1987. These two storms are good reference points. The intervening years saw the development of Folkestone as a fashionable resort, two world wars, the coming of the railways and a Cross-Channel ferry service.

Boots to Books The Boots to Books Project sets out to record and expand on their guided walks in written form. Over the next three years, they plan several booklets, based on the many  local walks they have devised and delivered since they set up in 2010. The first booklet in the series: “Explore Folkestone Artworks with Pavement Pounders “ appeared in May 2013 to tie in with the Creative Foundation’s launch of the Folkestone Artworks.

Out of the Rain Inspired by the lousy summer weather, they have turned some of their walks into illustrated talks. Themes are the same as those for The Boots to Books Project. Interested groups should contact David or Maryanne .

42a The Old High Street